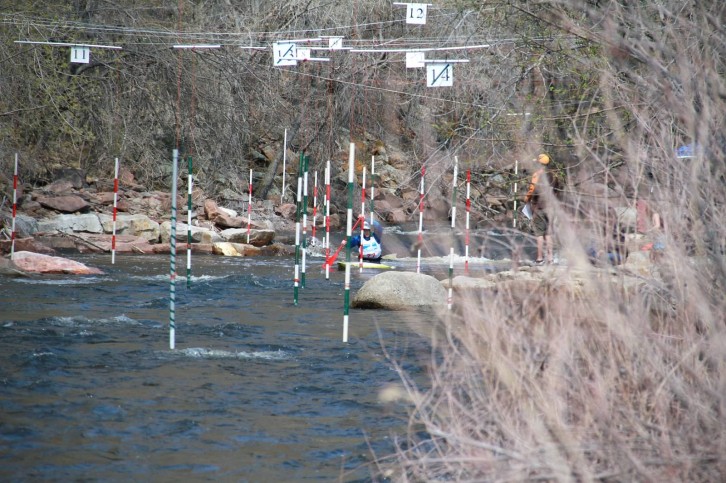 There have been many white water racing clubs and school programs over the years in Colorado. The oldest is certainly the FIBArk Club (First In Boating on the Arkansas) that hosts the FIBArk festival in Salida, CO with the Colorado Rocky Mountain School program, pioneered by Roger Paris, a close second. Colorado Academy and the Vail Mountain School used to have paddling and racing programs, and the Front Range Paddling Association had a brilliant history. Durango Whitewater, founded by Nancy Wiley, is an Olympic Center of Excellence with a host of legendary coaches like Kent Ford, Cathy Hearn and Andy Corra, and it is still one of the strongest programs in Colorado along with CRMS. The Great Blue Herons of Grand Junction have produced a number of excellent athletes and coaches under Dennis Adams’ aegis. Russ Huff and Scott Shipley have a powerful club, Lyons Kids Kayaking, which is quickly becoming one of the biggest and most dynamic programs in the state. The Dawson School Canoe and Kayak Team, founded by Nate Lord, turned twenty last year.

Each of these clubs or school teams has or had a proud history, and each has had a tradition of friendly competition that resulted in the Rivermeister series and the Colorado High School Whitewater Cup that in turn has become the Rocky Mountain Whitewater Cup and Rocky Mountain Wildwater Cup. Each of these programs has produced United States National Team members. However, there has not been a coordinated statewide program that has established a sustainable model of athlete progression from absolute beginner through various intermediate levels to national and world-class athletes.

This changed in 2013, when several visionary Dawson parents—John Putnam, Christina Hinton, Caroline Coggan with Nate Lord and Russ Huff of Lyons Kids Kayaking—were able to obtain an O-1A visa and hire the distinguished Spanish coach and athlete Jordi Domenjó, thanks to the support of the Dawson School, USACK and Scott Shipley. From the very start, once John Putnam was on board as our legal consultant for the visa process, Dawson’s George Moore and Christine Lipson immediately saw the value of working together with Team Colorado to bring Jordi to Colorado, and they have been supporting this project from the very beginning. To make it possible (legal) to employ Coach Jordi year round and make it feasible for him to live in Colorado these individuals created a non-profit organization with a 501c3 designation. Nate dubbed it Team Colorado Whitewater Racing after a loose affiliation of wildwater athletes led by former Dawson staff members and dorm parents Scott Overdorf and Patty McCool.

Initially DSCKT and Lyons Kids Kayaking organized a regular training schedule with Jordi that was administered by Team Colorado and that began to expand as Colorado athletes attended Team Colorado training camps associated with local, national and international races that Jordi organized. We went to the Open Canoe Slalom Nationals, and Jordi even led an independent Dawson School Winterim to Spain and France, then he led a group of Colorado athletes to the Pyrenees Cup. Jordi led training camps before Jr./U23 National Team Trials and Senior National Team Trials. Jordi collaborated with Cathy Hearn at the FIBArk Festival, and he led a Euro Trip through Slovakia, Germany and Spain last summer. Jordi competed in several World Cup races and the Senior World Championship, then he returned to coach our athletes at the US Senior Nationals and Jr./U23 Team Trials. Dawson athletes participated in each of these experiences. By the time Jordi returned to Colorado there was a strong Lyons Kids Kayaking training group that included several very talented and experienced middle-schoolers. There was also a Dawson Middle School kayaking program with some enthusiastic athletes with tremendous potential who had been training with Dawson alumni/ae coaches and senior Dawson athletes.

One way to look at Team Colorado Whitewater Racing is that the USA Canoe Kayak is not in the business of supporting grass roots athlete development below the national or elite level of athlete. Hence there was no pyramid or base of athletes feeding National Teams. There were local clubs with talented athletes and legendary coaches, but there was no organization between the local club level and the National Team level. Now there is an immensely powerful partnership between local Colorado clubs, including Lyons Kids Kayaking and DSCKT that enables athletes of all ages to compete at the highest level to which they can aspire and that enables these athletes to travel and engage with fabulous multi-cultural global experiences.

From a Dawson School perspective there is another way to look at this. There are Dawson parents now training and racing at the Senior Masters level. There are Dawson alumni/ae training and racing at the U23 and Senior level. There are Dawson Alumni/ae coaching Dawson athletes in the fall Middle School Program and during the spring Dawson School Canoe and Kayak Team season. Dawson School athletes competed together in Europe last summer in Austria and Slovakia. Thanks to Jordi Domenjó, the Dawson community has the opportunity to train and/or race all over the world at all ages and all skill levels and become immersed in spectacular global educational experiences.

Nate Lord will tell anyone who seems even remotely interested, “Once we had Jordi’s visa and a business plan to employ him, I thought Jordi would take over DSCKT, and I figured that I could simply hang out on the couch and eat doughnuts, but that didn’t happen. We have a local, regional, national and international travel schedule full of training camps and races, and I am as busy as I ever was. It didn’t turn out exactly the way I envisioned – it turned out exponentially better.” Coach Jordi Domenjó has been the catalyst to a dynamic process of creation where local clubs and organizations, including the Dawson School Canoe and Kayak Team, have forged powerful partnerships that have made national and international athletic achievement and global educational experiences possible for boys and girls and men and women of all ages.