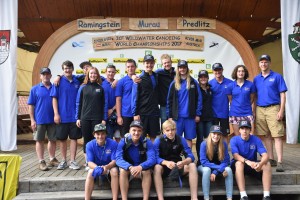 This summer Nate Lord and Jeff Owen accompanied a group of 15 very talented competitors between the ages of 15 and 23 to compete in Murau, Austria for the 2017 Junior and U23 Wildwater World Championship.This year for the K1 competitions we had Nate Foster, Hunter Keeley, Kell Fremouw, and Gus Madore competing in K1 junior men; Amanda Creek and Katie Owen competing in K1 junior women; Joslin Coggan, Harriet Rollins and Hannah Rubin competing in K1 U23 women; and Jack Andraka in K1 U23 men. Our competitors in C1 were Peter Coggan, Hunter Keeley, Kellen Doyle, and Kell Fremouw racing in C1 men junior; Will Coggan and Ben Peeples racing in C1 U23 men; and Joslin Coggan,Harriet Rollins and Hannah Rubin competing in C1 U23 women. Trevor Jones and Ben Deitsch competing in C2 junior men; and Hunter Keeley and Ben Peeples racing in C2 U23 men. Many of the competitors qualified for and competed in multiple events such as Hunter Keeley who competed in K1 men, C1 mens, and C2 mens; Trevor Jones who competed in C2 junior men and C1 junior men: or Harriet Rollins who competed in K1 women, C1 women, and C2 women. Wish these guys luck with whatever they going to do next.

Calling all paddlers, SUPers, and whitewater enthusiasts!
Summer will soon be upon us!